When it comes to body snatching prevention, it’s doesn’t come any better, or should I say smaller, than Eckford watchtower.

Eckford, nestled in the borders of England and Scotland, is perhaps the smallest watchtower that I have found to date. Don’t let that put you off though as it certainly makes up for it in the way of a very amusing body snatching story involving local legend ‘Dandy Jim’!

This round little watchtower consists of slit windows and a set of simple steps leading to a narrow door. Although now boarded up, if you balance on the top step – at your own risk obviously – you can just to say peer inside.

The door is now covered with perspex and a wrought-iron gate. At the Heritage Hub in Hawick, you can actually see architectural drawings for these gates.

But what about the inside?

Not fantastic, I won’t lie, but at least you can peek inside (just about). Some watchtowers you can’t even do that. High Bradfield, for example, is now a private residence, so no chance of looking inside that. Unfortunately.

Not great photos admittedly, and I do apologize, but I hope you can get an idea of what the interior of Eckford watchtower looks like.

Both photos show the edge of a fireplace which can be just made out under the collection of branches dissecting the image.

One evening in 1829, not long after William Burke had swung for his part in the West Port murders, James Goodfellow aka ‘Dandy Jim’ was walking past Eckford churchyard on his way home after spending the evening with his sweetheart.

A stout fellow, he was not easily frightened and took little heed of the stories told over a pint of ale about the dangers of being abroad late at night.

On getting closer to the churchyard, he noticed a strange, luminous haze hovering above a grave.

Dismissing the idea that the light was a corpse-candle* but remembering that there had been a burial in the parish only the day before, Jim decided to investigate.

As he got nearer, the light disappeared, only to reappear moments later.

Creeping up to the churchyard wall, Jim peered over and look out onto the dark expanse of gravestones.

Unable to see through the darkness, he, however, heard more than enough commotion to realize that he had stumbled upon a pair of body snatchers.

Eckford lies 13 miles south of Kelso and the pair of miscreants currently digging furiously among the gravestones had travelled to the Eckford in a gig.

Realizing that he had to do something to stop the body snatchers, Jim decided to create a diversion.

Untying their horse from along the churchyard wall, he gave it a sharp slap on its behind sending it and the gig racing across the nearby fields.

The bodysnatchers, noticing that their only means of getting home was running loose, dropped everything.

Whilst the body snatchers huffed and puffed across the field, Dandy Jim put his plan into action.

He swapped places with the freshly exhumed corpse which was lying next to the open grave. Not long afterwards, the two body snatchers, muttering and cursing to one another, returned to the churchyard to collect the cadaver and be on their way.

The Corpse Is Warm

‘My!’ exclaimed one of the body snatchers, ‘this corpse is a heavy one‘!  Heavy or not, Jim was thrown into the back of the gig to start the journey back to Kelso.

It was not a relaxed affair. The two body snatchers, fearful of being caught, were becoming more and more agitated as the miles slipped by.

‘I’ll take an oath before the Justice of the Peace’ declared one, ‘the body’s warm!’

Unable to restrain himself any longer, and growing hot under the cover of the cloth, Jim threw off the covers from his face and cried:

‘Warm you say? Pray, what would you be if you came from where I have been?’

With a tremendous leap, the body snatchers jumped from the gig, one tearing across the open fields the other heading for the cover of woodland.

As soon as he’d finished laughing, Jim turned the horse around and headed home to Kelso, the proud new owner of a horse and gig.

It is from this attempt that the parishioners of Eckford rallied round and decided to build the watchtower so that their dearly departed might rest in peace.

Or so it is said.

After denying his involvement in the theft of 24-year-old Joanna Chinnery from St John’s churchyard in Little Leighs, it would be the smell emanating from this body snatchers cart that would eventually be his downfall. 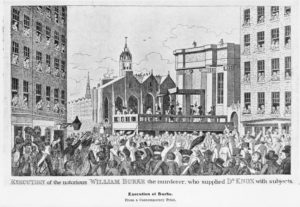 Who Were Edinburgh’s First Body snatchers?

Long before Burke and Hare had perfected the subtle art of Burking, two women from Edinburgh were doing just 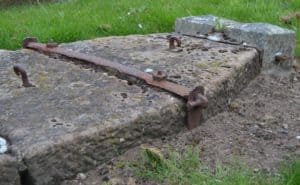 By the early 1800s, professional resurrection men or body snatchers were starting to appear within our parishes. People were