Not all watch houses or watchtowers are grand affairs like those that you see in Edinburgh let’s say. Some, like the watch house at Eyemouth, are nestled quietly in the corner of a long-disused churchyard, overlooked by passers-by who simply don’t know the history attached to the place.

Eyemouth watch house has its own unique story to tell. Its walls are covered with eroded gravestones of yesteryear yet, there isn’t one gravestone that stands erect in its original location in what was once the town’s cemetery; those that remain being tucked up tight against the former churchyard wall, helping to keep the soil in place.

Dig deeper into the history of Eyemouth watch house, however, and you will see that the structure isn’t quite as it first appears.

At first glance, the winged cherubs and skull and crossbones, barely visible despite the best efforts of the bitter north-east weather fronts, give the impression that the building itself dates from the 18th century or earlier.

But this is just a facade.

The watch house, which replaces an earlier example that stood on the opposite side of the entrance gate, dates from 1849, built at a time when the threat of resurrection men had long gone.

The Anatomy Act had passed through Parliament only seven years earlier but there were many in the community who would no doubt remember body snatchers operating in the area.

Not too far away are the parishes of Chirnside, Edrom, and Duns where fear of the body snatchers rang rife amongst the parishioners. It was only a short trip down the road before you reached Eyemouth and the inhabitants were quite right to still feel nervous about this macabre practice.

Although it was hoped that the Anatomy Act of 1832 would put a stop to the dreadful act of body snatching, trade did not stop overnight and remote villages, especially if an unusual cadaver was available, could quite easily still have been targeted.

It was in everyone’s interests to remain vigilant. After all, Edinburgh’s medical schools were a mere 51 miles away.

Prior to 1849, Eyemouth was a busy fishing town of around 1,400 inhabitants, boasting a notorious smuggling heritage, yet all that was to change in a matter of six weeks when ‘King Cholera’ decided to pay a visit.

At the end of October 1849, this particular outbreak swept through Eyemouth at such a rate that more than 100 people died in only 6 weeks.

By the time the epidemic passed and the deceased had been buried, the little cemetery in the centre of town was full.

In order to help provide more burial plots, an additional layer of soil was added, raising the ground level by 6ft.

Any gravestones that were laying horizontally were simply covered over while those remaining were used in the retaining wall of the newly elevated site.

Not all the vertical gravestones were used in the retaining wall, however. Perhaps the most striking feature about the Eyemouth watch house is that it is covered in old gravestones. Stones gathered from the old cemetery itself before they were buried under the soil.

You cannot visit the site of the old cemetery without walking through its quiet memorial garden to the back of the terraces and head to the bronze memorial sculpture located on Paxton Terrace.

On the night of 14 October 1881, following a most violent storm, the communities of Eyemouth and nearby St Abbs, Burnmouth, and Cove were left devastated when 189 men lost their lives in one of the most dreadful fishing disasters ever witnessed on our shores.

The memorial depicts the 93 women widowed and the 267 children made fatherless.

It was unveiled on the 126th anniversary of the Eyemouth fishing disaster, known locally as ‘Black Friday’.

The sculpture, standing on a slim stone plinth, faces out across the water, the women looking on for their husbands and the children for their fathers.

Not much is known about Eyemouth other than what I’ve shared here. The watch house is actually on the Buildings At Risk Register (BARR) as of November 2011 which is such a great shame.

Cement pointing has increased the speed of erosion of the already badly weathered gravestones according to the register, and it has been a number of years since my last visit, so I would hate to see the extent of the damage now.

I have to confess that I have yet to search through the archives for further information though and you may well find something here that I’ve missed.

If you do wish to carry out your own research into the records for the old cemetery you can find them at The Heritage Hub in Hawick. More information can be accessed via their website here

If you wish to read more about the stunning sculptures that commemorate ‘Black Friday’ you can do so in an article in The Herald newspaper which you can access here The article dates from 2007, but it gives you a good overview. Unfortunately, there are no further images of the beautiful memorial in the article.

‘Black Friday’ was covered extensively in the press at the time and a search in the British Newspaper Archive website accessed here (for a subscription) throws up numerous articles which may be of interest if you wish to research this further.

I have mentioned Geoff Holder’s Bodysnatching: A Gazetteer many times on my blog and on social media and when I first started out, I used it as my bible. It’s a fantastic resource but as the years have progressed and my research into the subject has developed, my own copy has become heavily annotated.

If you do want to start out on your own body snatching expedition and can’t wait for me to write my own guide to the sites within the UK then I would defiantly recommend a copy for your glovebox.

You can buy Geoff’s book via Amazon.co.uk and also AbeBooks.co.uk and these links will take you to the relevant pages for both sites.

It took one word from the Miller woman in 1829 and a quiet Midlothian village was awash with resurrection men. 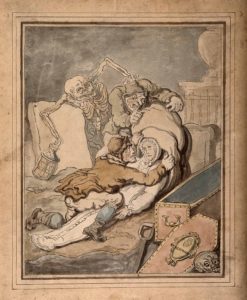 The story of John McIntire who was buried alive in Edinburgh, 15 April 1824, is perhaps best taken with a 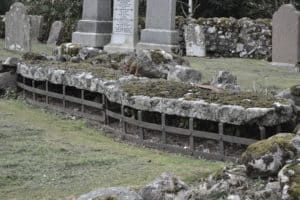