Body Snatching Prevention for the Poor

To say that the poorer members of Georgian society were at a disadvantage when it came to protecting their loved ones from resurrection men is perhaps not quite right.

If a body was available and access to the grave was possible, then it was ‘fair game’ as far as the body snatchers were concerned.

How the poor fell foul was the availability of body snatching prevention. They couldn’t afford to commission elaborate caged lairs or personal mortsafes, some couldn’t even afford a subscription to the parish mortsafe or watching society.

No, for some poorer members of the parish, other preventions had to found, the majority of which we simple homemade solutions.

Authorities did little to help protect the dead against the resurrection men and as a result, parishes were left to find their own protection. Left to their own devices, some parishioners came up with some rather inventive solutions.

The rich protected themselves with mortsafes and caged lairs but the poor, well, that’s a very different story.

For some parishioners, contributing to a weekly ‘watching fund’ or putting a few pence aside so that they could use the parish mortsafe was too much of a stretch.

To try to ease their worrying, and to minimize the risk of body snatchers, the poor resorted to some very simple deterrents. The easiest and perhaps most well known of the ‘home-made’ devices was the simple and quite ineffective pile of sticks/stones placed on your loved one’s grave.

Unsuspecting relatives believed that by placing sticks or stones in a seemingly random pile, they would be able to see if the grave had been tampered with.

Although providing some peace of mind to the grieving relatives, to the body snatchers it was a different story. The stones acted like a beacon shining in the graveyard, indicating that a fresh cadaver was available.

The resurrection men would simply take note of the layout of these tokens before digging the grave. As a result, any carefully laid sticks or piles of stones were simply returned to exactly the same place after the body was removed.

When family members visited the grave the next day, the grave would be exactly how they’d left it the night before.

Many believed that such simple methods against the body snatchers were futile. If a body was needed for the anatomists’ table, nothing, except something a little more extreme would stop them.

In 1817, an anxious sexton in St Martin in the Field thought just this. The sexton’s ‘contraption’  consisted of a ‘number of gun barrels so as to form a magazine, that they might be discharged together’.

Having probably been inspired by the use of cemetery guns, the sexton’s design went one step further.

A series of tripwires were placed from the gun to a piece of wood which was then buried in the grave. When the body snatcher moved the wood in order to start digging, the wires would release the trigger along with a volley of bullets in the process.

Body snatchers carried out a raid in St Martin in the Field one night after such a device had been installed. The Times was to report on 30 December 1817 that a ‘tremendous report’ was heard in the graveyard. Clearly the tripwire had been touched by the unsuspecting body snatchers.

When a party went to investigate the noise, it perhaps came as no surprise that a number of ‘spades, shovels, picks and other resurrection paraphernalia’ were found.

One of the party also found a body snatchers hat with a single bullet hole having been pierced in the side. However, reports state that there was no exit hole in the hat. Does this mean that the body snatcher was killed during the raid and that he himself became the subject for the anatomist’s table?

Another sexton in Anderston near Glasgow was so concerned that his churchyard would be visited by the resurrection men that he took matters into his own hands and nearly killed himself in the process.

Trying desperately to keep his dearly departed flock safe he proceeded to dig a grave much deeper than usual. The result being that the sides collapsed in on themselves and nearly buried the poor man alive!

Fortunately for the sexton he was spotted by some nearby workers who rushed to his aid before any lasting damage was done.

The fear of a body snatcher stealing away their loved one was too much for some people and they would resort to any means possible in order to protect their graves.

In 1823, the method of rigging trip wires to cemetery guns was taken one step further by a father who was burying his child in a churchyard in Dundee.

Placing a small box containing gunpowder at the bottom of the child’s coffin, he rigged trip wires so that any tampering with the grave would result in the bodysnatcher being blown up. Desperate times call for desperate measures!

Other forms of deterrent included adding straw/stones to the soil as it was being backfilled into the grave. This would slow down the digging when the body snatchers were trying to exhume a corpse. The shovel would repeatedly hit against these obstructions, hopefully deterring the body snatchers enough to move to a different grave.

This, however, was only as reliable as the person distributing the straw. It was not always as effective as one might hope as Thomas Heeson found out in 1828.

If all else failed you could resort to quick lime or add sulphuric acid prior to burial as one York newspaper reported. Whichever method was chosen, there was never any guarantee that the grave of your loved one would be left alone.

Accounts we read in the newspapers are of those that unfortunately didn’t work. They retell the stories of the poor that probably lost their loved ones to the anatomists’ table. They share with us a few desperate attempts by family members to keep their loved ones safe during what has been termed the ‘Resurrection Times’. 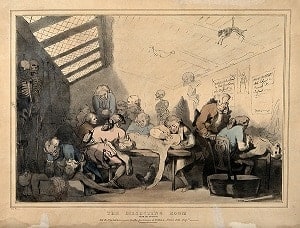 Someone once said to me ” a season for body snatching, who knew”, and I agree, not many do, 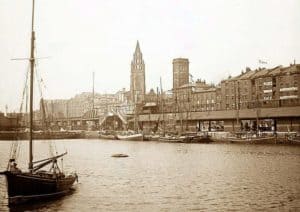 In 1826 thirty-three cadavers were found stuffed into barrels waiting to be shipped from Liverpool to Leith, Edinburgh. But what happened to the gang responsible for the snatchings?