By the early 1800s, professional resurrection men or body snatchers were starting to appear within our parishes.

People were becoming nervous about burying their loved ones, believing that they would be targeted and taken for dissection as their backs were turned.

Many body snatchers were adopting cunning methods in stealing a dead body for the surgeons, being able to remove a cadaver in less than an hour if conditions were right.

Something in the way of protection was needed over the graves of the recently deceased and that something, at first, could be achieved in no simpler way than with the humble mortstone.

A mortstone was a coffin-shaped slab of stone, was either roughly-hewn into this shape or carved out in a rudimentary manner. Most mortstones or ‘Resurrection Stone’ as they were also known were usually over 7-8 inches thick and would simply be placed over the top of the grave immediately after burial. They would remain in situ until the cadaver had decomposed sufficiently to no longer be of interest to the anatomists.

The idea behind a mortstone was simple. Dissuade opportunists or gangs from snatching the cadaver by putting as big an obstacle in their way as you can find.

It would then be hoped that the effort to remove the mortstone would be too great, and the body snatcher would simply find an easier grave to target.

Due to its size and weight, in order to be able to move to stone into position, several men, together with what is known as ‘lifting tackle’, would have been required.

Lifting tackle was essentially a series of chains, with a hook attached at each end, that hung from a central point from a tripod. They would have been made by the local blacksmith and used for moving both mortstones and, as the period wore on, mortsafes.

Most mortstones had a series of metal hooks or eyes embedded into the top so that the hooks from the mortsafe tackle could be clipped onto them. Some mortstones, which we’ll see in a moment, had a metal bar that would have been threaded through these hooks or handles and the stone lifted into situ this way instead.

Evidence of the fear of body snatching can be gauged by the number of mortstones dotted throughout the UK, primarily in Scotland, and like all things relating to body snatching, some are in better condition than others.

You don’t often see mortstones in England, if ever in fact, and the one at St Robert’s Church, Pannal in North Yorkshire is a particular treat if you know where to look.

The ‘Resurrection Stone’ as this mortstone is known, is currently tucked away very much out of sight under a stone coffin at the entrance to the churchyard.

Rather unusually, there doesn’t seem to have been a subscription or ‘club’ for using the Pannal mortstone, unlike for the use of mortsafes or watchers clubs. Instead, Pannal charged a Guinea for two weeks hire of the mortstone which weighed over a ton in weight.

‘This stone was originally made to prevent body-snatching from this church-yard. About 1932 it was removed and made into a sink. It was returned to the church authorities and replaced by the Harrogate group of the Yorkshire Archaeological Society in 1938.’

Unfortunately, this is inscription can no longer be seen.

Since having a second life as a sink – most likely for cattle – the resurrection stone now sits out of sight to most visitors to the churchyard, offering just the slightest of glimpse to those who know where to look.

Mortstones are predominantly located in Scotland and examples can be found throughout the country, with clusters being in the Aberdeenshire area, down to Mid Lothian, and then across into Central Scotland.

The mortstone at Gullane has certainly seen better days and has unfortunately broken into three.

This stone, however, is a great example of just how thick these mortstones could actually get, and this stone will have broken as the ground beneath it has shifted.

The stone has two rows of metal handles inserted into the top side showing just how it would have been lifted into place using rods.

There are actually two mortstones located in the grounds of the now ruined St Andrew’s Old Parish Church in Gullane, although one is in much better condition than the other.

Perhaps one of the finest mortstones that has survived can be found in the churchyard of the ruined St Nicholas Church, Prestwick. It’s the mortstone I’ve used as the first image in this post as well the image below showing a different angle.

This superb example of a mortsafe, has both the metal straps and iron lifting hooks still intact.

You can see the thickness of the stone, which is similar to the mortstone at Gullane and you can also see clearly how the stone was maneuvered into place.

If you’d like to discover more, you can hear me talk about the Prestwick mortstone and body snatching in general in a walking tour of Prestwick Churchyard which can be downloaded via Walking Heads.

Another paricularly fine example of a mortstone can be found in Kilmaurs, East Ayshire.

At first, this stone can be quite hard to find as it’s still in situ and a lot will depend on the upkeep of the churchyard itself as to whether you can find it or not.

Although partially buried, and all that can really be seen are the three iron lifting hooks sticking out from the grass, you can only begin to imagine the stories behind this mortstone.

It is possible that the stone was put into situ using a single iron rod threaded through the loops visible in the picture. The position of these hoops doesn’t seem quite right to have used lifting tackle.

We can only guess if the occupant is still beneath this particular stone or not. The only way of ever really knowing would be to remove the stone itself and if it’s been in the ground for this long undisturbed, it seems a bit immoral to lift it out of shear curiosity.

There are other mortstones scattered throughout Scotland. One lies in the grounds of Lasswade Kirkyard in Mid Lothian for example and another in the kirkyard at Fortevoit, Perth & Kinross. Rough-hewed stones can be seen at Inverurie and Kemnay both in Aberdeenshire and also at Peterculter not too far outside Aberdeen itself.

Certainly, all of the known locations of mortstones have not been included here, rather those that have a bit of historical and aesthetic interest.

You’re really dependant on people having recorded the existence of mortstones and writing this information in local histories. You can often find these in local libraries or digitally online in some instances.

An excellent starting point is Scottish Bodysnatchers: A Gazetteer by Geoff Holder available via the link for AbeBooks.co.uk

By no means a complete guide, but if you are travelling through Scotland, I’d highly recommend a copy stashed in your glove box for those impromptu visits to graveyards.

From Dressmaker to Body Snatcher

I am delighted to welcome the wonderful ladies from All Things Georgian as my first guest bloggers. When I 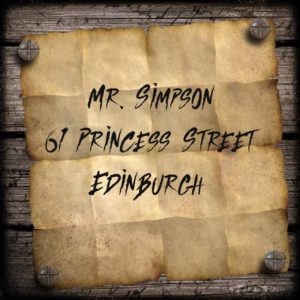 Notwithstanding an already arduous journey; one that involved jostling, the consistent rumbling of wheels, and the potential threat of highwaymen, 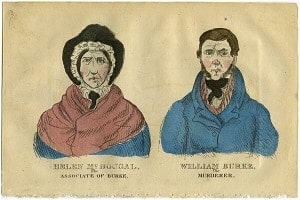 Making A Killing: How Much Money Did Burke and Hare Make?